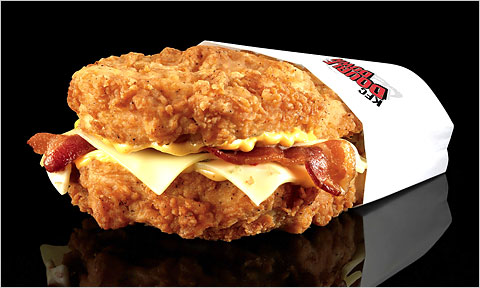 Behold, The KFC Double Down!

--------------------------------
The sandwich contains no bread. Instead, two deep-fried boneless white-meat chicken filets act in bread’s place. They contain a sandwich of bacon and melted cheese between them, with a splat of a mayonnaise product called Colonel’s Sauce to moisten the whole.

Lettuce? Tomato? Come on. The Double Down is a sandwich, not a salad. There is no lettuce on it. There is no tomato.

But for the record? The calorie count for the Double Down is 540, according to KFC. That’s exactly equivalent to a Big Mac over at McDonald’s, and well below the 920 that constitutes a Double Whopper at Burger King.

Wow, I still think the Fifth Third Burger (5000 calories) is more disgusting, but we now have another samich that could kill us :)

We have received and accepted an offer from Apple Inc. to sell our family of websites:

Sorry, Google. Your offer was too cheap. This obviously means that we are going to pass the torch to Steve Jobs and buy a money bin to swim around in. Good luck, buddy. If you were a fan of us, too bad. You didn't buy enough T-shirts. This deal values each of our blogs at $3 billion. AOTV was the main sticking point in our past discussions with Google, but Apple was very impressed by AOTV 4 - United Banks of America. We would like to thank our fans for making us filthy rich, but now you guys can suck it... SIDEWAYS!