The greatest wrestling match of all time

Mankind is by far the greatest of all time...

PC
Posted by Productive Citizen at 10:57 AM No comments:

PC
AOT
Posted by Productive Citizen at 1:43 AM No comments: It wasn't me, but some overly excited texan broke the plastic ring that connects the wiimote to the fabric wrist strap. There is what is left, and my Walmart care plan, which covers remote controls, but only after the one year warranty of Nintendo's expires...
AND NINTENDO'S WARRANTY DOESN'T COVER THE DAMN WIISTRAP PEOPLE!
GRRRRR

This very thing happened to me today!
I blame EA, not Nintendo... for now...


PC
Posted by Productive Citizen at 7:39 PM No comments:

Check out my friend's movie about the Ohio Election malfunction

Mr. Gasca, a New Yorker who was discovered filming movies with a handheld camera three times in 2002 and 2003, became the poster boy for movie piracy. His brazen conduct led in part to Congress's 2005 toughening of movie piracy laws to make illegal filming a felony instead of a misdemeanor.

Mr. Gasca often enlisted friends to sit beside and in front of him at movies, so no one would stand up and interrupt his filming. He often snuck into pre-release screenings. When caught taping "Anger Management" in 2003, he dumped his tape into his friend's popcorn and escaped, but was later caught. In early 2004, he told his lawyer he needed to buy cold medicine and then escaped from a drug store. It took federal agents more than a year to track him down in a Florida motel, where he was found with stacks of movies and copying equipment.

Judge Dean D. Pregerson sentenced Mr. Gasca to one year for each of the three piracy charges, the maximum penalty under the older law. Under the new law, he could have received up to three years for each incident. The remaining four years stem from other charges, including false use of a Social Security number, witness retaliation, and escape.

After his sentencing, Mr. Gasca stood up and said the case was a conspiracy by the government, according to prosecutor Elena Duarte. Mr. Gasca's attorney did not respond to a call for comment. In July, Mr. Gasca told CBS News that he was working on a novel version of his previously written screenplay, "The Prince of Piracy."

The movie industry pushed hard for the tighter laws for in-theater pirates because they are the first link in elaborate distribution chains that create the millions of illegal DVDs that are sold world-wide.

Posted by Productive Citizen at 12:20 AM No comments:

This guy in the crowd on ESPN West Virginny U vs Rutgers was wearing a "west fucking virginia" shirt, pretty awesome cuz it was live and they showed it nationally, and the dude was all hell yea, and wasted, so good for him, and hopefully someone tivoed it. 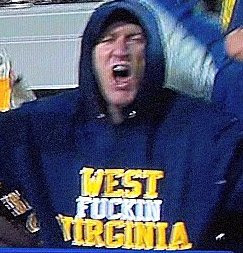