When will the hate end, and the Snuggie begin?

PC
Posted by Productive Citizen at 5:08 PM No comments:

It's only been a week, but I miss him.

Some of Letterman's great moments in Presidential Speeches.

PC
Posted by Productive Citizen at 6:51 AM No comments:

In honor of the 25th anniversary of Macintosh computers by Apple, I thought I would post some blasts from the past by our favorite titans of industry, Steve Jobs and Bill Gates.

First the Apple Hype Machine's 1984 Ad at the Superbowl...

Techno Sucks
PC
Posted by Productive Citizen at 8:35 AM No comments:

Where to start with why this is random stupidity. Yea Right.

www.musicisgoodfood.com
PC
Posted by Productive Citizen at 10:03 AM No comments:

So we obviously are in the worst recession since Jesus led a hummus strike in Palestine. While playing Gears of War 2 last night, a problem arose. My friend did not have the new "combustible map pack." We suggested that he buy them with his xbox live points. He pointed out that his points were on his other account and that he didn't know if they could be transferred or traded to his present account. This lead us to a revelation. We should created a currency market for videogame points. The Spacebucks exchange would be a place where wii, xbox and ps3 "spacebucks" could be traded in exchange for each other as well as US Dollars. If we could take out insurance on the value our spacebucks, we could hedge against inflation or deflation (even finance home purchases.) This market would be obviously more transparent than any other financial market. As a result of the transparency, spacebucks would be worth more than the US Dollar relative to the videogame currencies. Also, we may as well throw a conversion rate for WoW gold and CnC Tiberium to spacebucks as well. So right now, the $10 gets you 800 xbox points, well 7 spacebucks would get the same amount. Seems like a no brainer. The dollar will ultimately crash, but spacebucks will have the same purchasing power, a win win for the gamers and the game companies. We could start buying actual commodities in spacebucks, a stable currency would create less volatility in the actual gold and oil markets. Lastly, the money supplies can be controlled by the central banks of Nintendo and Microsoft. Sony's damn near insolvent, so they would be a lot like the Iceland of the spacebucks exchange. Videogame companies have less debt than the federal reserve and the central banks across the world, so this could lead to broader stability in the markets. So let us write to congress as well as our facefudge pals, our mayonnaisespace compatriots, and twitter our way out of this recession. May Gears bless us, and may Gears bless this United Spacebucks of America.

www.technosucks.com
PC
Posted by Productive Citizen at 7:18 AM No comments:

So I got back from CES 2009 in Las Vegas yesterday, and I thought I would share my impressions of the show with you guys. I will start with the good stuff:

1. Slingbox - this was the most impressive booth at the show, not because they spent a lot like Sony's dumbasses, but the product has really evolved. My personal favorite was slingbox for iPhone, coming soon. They were streaming TV to phones from San Fransisco. Pretty damn neat. They are a subsidiary of Echostar (symbol SATS).


2. Qualcomm (Flo TV) - Another part of the same trend as Slingbox. Qualcomm is intriguing as they own patents on chipsets that allow cellphones to stream TV. They were also players when it came to the spectrum auction last year. Lastly Flo TV has created a partnership with some nice content providers (ESPN, CNBC, Viacom, Fox, and CBS). Qualcomm's stock symbol is QCOM.


3. OLED from Sony and LG - OLED is by far the most innovative product at the show, even though the same could be said of last year's show. Flexible OLED by Sony and insanely thin TVs from LG could show us the future of screen technology, once it isn't ass expensive. I offered top dollar for a few of these LG TVs. Also LG had a Dick Tracy kind of watch that was almost as annoyingly stupid as a netbook, but at least it was innovative I guess? Sony trades with the symbol SNE and LG as LPL here in the US. Although I wouldn't buy those stocks with your money. 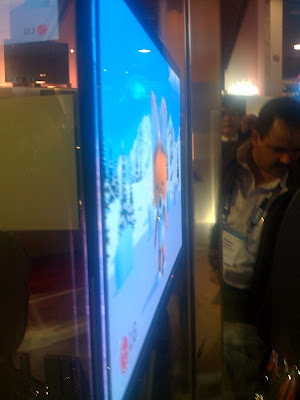 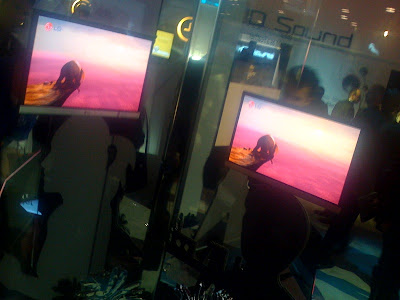 4. Windows 7 - Just as I started thinking I want a Mac, Steve Ballmer stops doing lines long enough to announce a new operating system. In an attempt to stop the bleeding from Vista, Windows has become even more Mac-like. The taskbar has been changed to aide productivity. A touch interface to the operating system seems gimicky at first, but after a solid demonstration at the booth I gotta say I didn't hate it. Think Vista + iPhone - all that security nonsense. Are you sure you want to think that? Sure? Really? Okay. Wait, Are you sure? Yea. Microsoft trades as MSFT in the US.


5. HDMI - This is the only place anywhere in technology that I see a solid model for growth and profitability. The new innovation is that they are going to use the new HDMI cables for transmission on network data. The proprietary nature of the standard will make it hard for DVD Jon or whatever other hackers to rip off this consortium of TV makers, content providers, and computer makers. Preventing piracy could help the companies, unless the consumer is dead. I wish HDMI was publicly traded but it is an organization of companies that I would not recommend investing with.

6. Alternative Energy (Green) - So I found some nuggets of growth in between Samsung and Microsoft's booths. Solar, Wind, Battery, and Power strip technologies are one of the only areas where I found innovation and the potential for earnings growth. Seeing as President Barry is a fan of saving the environment, resistance will be futile. Get on the bandwagon, get yourself some thinfilm, some windpower and a nice powerstrip that limits vampire currents. If you want to play these spaces, TAN is the solar ETF and FAN is the wind ETF.

Now for the worst themes of the show...

1. Netbooks - You may have heard of these ultramobile PCs. Where to start with why I hate them? From an end-user standpoint, I can't type on the damn things, they are too small for my hands. The hardware in these things tend to be worse than the laptop that I already own. They run XP, which is actually a good thing. From the investor standpoint, I simply hate the direction Sony, Toshiba, HP, and whoever else is going with these devices. Instead of releasing an innovative high price product, these companies are shifting towards low profit margin, already obsolete computers that are supposed to appeal to the newly thrifty US consumer. There is a flaw in their logic, that the consumer will buy their crap. They all hope to make back the revenues in volume of sales, but if the US consumer is truly dead, you better believe that they are not going to waste money on these pieces of shit. So let's just let these companies keep there fingers crossed as netbooks become more of a fad than swatches or pogs.

2. 3D - How many times does 3D have to fail before we take it out back and shoot it in the head? Sony and other TV makers once again seems to be in love with planned obsolescence. It is 2009, where it the Hologram? I can see how movie theaters will benefit from this new technologies, but who really wants a 3D TV in their home? Holograms, please!

3. Broadband TV - I am torn on this topic. I feel that we need sinergy between all media, but here in the US our bandwidth sucks. Which leads me to why this internet TV kerfluffle is too early. Sure sure, in Japan these things probably rule. They have way faster internet. I cannot get blindly behind this technology until we figure out a plausible way to make the US rank in the top 5 in bandwidth speeds. The reason this is number 3, is that it is innovative although implausible here in the states. PS, Yahoo, screw your widgets.

4. Massage chairs - There were so many damn booths with these chairs, last year Audio Technica had actual masseuses, this year NADA. Qualcomm had a nice setup this year with real massages but in general, there was way too much furniture at the show. When did furniture become consumer electronics? Next year's CES may as well be held at an Ikea.

5. Less boothbabes - In what is probably the most tragic story of the show, there were probably 80% less boothbabes at the show! Who knows how this will effect Los Angeles area shops in the next quarter, but this is just a further sign that tech companies are afraid of the continuing downturn. When asked about the downturn, this boothbabe said that tax cuts and supply-side economics will prove to be more effective than quantitative easing. Ha ha, actually she just stood there and looked pretty. 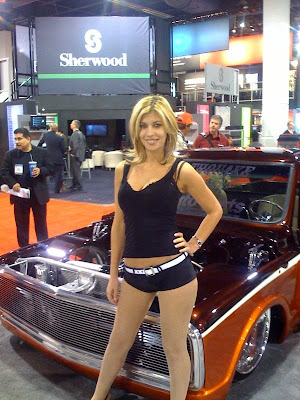 6. Vegas is hurting - And now for my take on the city of Las Vegas and how it has shown me that we are nowhere near the end of the downturn. All throughout the city, there are unfinished projects by MGM and Las Vegas Sands, I must give credit to Wynn for finishing Encore. A cabbie, formerly a casino worker, told me that 100,000 people showed up to apply for the 10,000 new jobs at Encore. The town is filthy, and has a scent of failure, literally. Unemployment has gone up to 9% from its low of 0.3%! At the show, it was noticeable in the lack of attendance. My foot didn't get stepped on once, and I didn't even catch a waft of that trade show fat tech nerd body odor that I have become so accustomed to. Back to the economy, how can there be a turnaround with no bottom in real estate or unemployment? I think everyone should procede with caution in the stock market as well as with your own careers. If you have a job, keep it. If not, go back to school. Can't go back to school? It seems like whoring yourself is not as profitable as it used to be. Most whores in Vegas were haggling. Truly a recession.