I hope all of you are off to a nice start to the year.
There's a whole lotta stupid to get to... 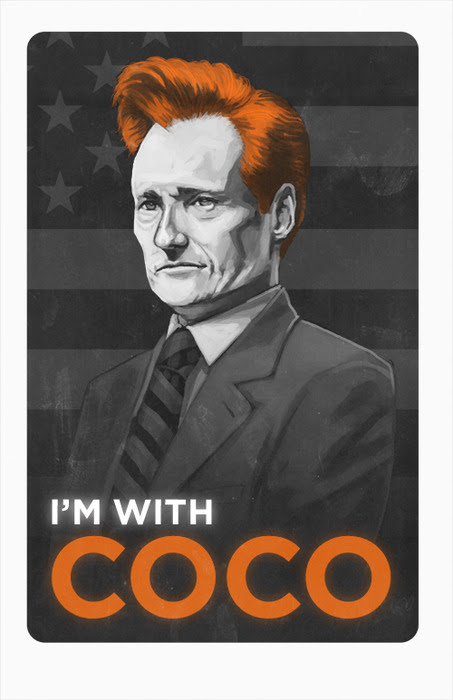 Here is a full letter from Conan about the situation he faces:

In the last few days, I’ve been getting a lot of sympathy calls, and I want to start by making it clear that no one should waste a second feeling sorry for me. For 17 years, I’ve been getting paid to do what I love most and, in a world with real problems, I’ve been absurdly lucky. That said, I’ve been suddenly put in a very public predicament and my bosses are demanding an immediate decision.

Six years ago, I signed a contract with NBC to take over The Tonight Show in June of 2009. Like a lot of us, I grew up watching Johnny Carson every night and the chance to one day sit in that chair has meant everything to me. I worked long and hard to get that opportunity, passed up far more lucrative offers, and since 2004 I have spent literally hundreds of hours thinking of ways to extend the franchise long into the future. It was my mistaken belief that, like my predecessor, I would have the benefit of some time and, just as important, some degree of ratings support from the prime-time schedule. Building a lasting audience at 11:30 is impossible without both.

But sadly, we were never given that chance. After only seven months, with my Tonight Show in its infancy, NBC has decided to react to their terrible difficulties in prime-time by making a change in their long-established late night schedule.

Last Thursday, NBC executives told me they intended to move the Tonight Show to 12:05 to accommodate the Jay Leno Show at 11:35. For 60 years the Tonight Show has aired immediately following the late local news. I sincerely believe that delaying the Tonight Show into the next day to accommodate another comedy program will seriously damage what I consider to be the greatest franchise in the history of broadcasting. The Tonight Show at 12:05 simply isn’t the Tonight Show. Also, if I accept this move I will be knocking the Late Night show, which I inherited from David Letterman and passed on to Jimmy Fallon, out of its long-held time slot. That would hurt the other NBC franchise that I love, and it would be unfair to Jimmy.

So it has come to this: I cannot express in words how much I enjoy hosting this program and what an enormous personal disappointment it is for me to consider losing it. My staff and I have worked unbelievably hard and we are very proud of our contribution to the legacy of The Tonight Show. But I cannot participate in what I honestly believe is its destruction. Some people will make the argument that with DVRs and the Internet a time slot doesn’t matter. But with the Tonight Show, I believe nothing could matter more.

There has been speculation about my going to another network but, to set the record straight, I currently have no other offer and honestly have no idea what happens next. My hope is that NBC and I can resolve this quickly so that my staff, crew, and I can do a show we can be proud of, for a company that values our work.

Have a great day and, for the record, I am truly sorry about my hair; it’s always been that way.

Good Luck, Conan. I always hated Leno, loved Carson and will watch you wherever you go next. Poor Andy... He finally had a job.

Next up, Google and China.

Like many other well-known organizations, we face cyber attacks of varying degrees on a regular basis. In mid-December, we detected a highly sophisticated and targeted attack on our corporate infrastructure originating from China that resulted in the theft of intellectual property from Google. However, it soon became clear that what at first appeared to be solely a security incident--albeit a significant one--was something quite different.

First, this attack was not just on Google. As part of our investigation we have discovered that at least twenty other large companies from a wide range of businesses--including the Internet, finance, technology, media and chemical sectors--have been similarly targeted. We are currently in the process of notifying those companies, and we are also working with the relevant U.S. authorities.

Second, we have evidence to suggest that a primary goal of the attackers was accessing the Gmail accounts of Chinese human rights activists. Based on our investigation to date we believe their attack did not achieve that objective. Only two Gmail accounts appear to have been accessed, and that activity was limited to account information (such as the date the account was created) and subject line, rather than the content of emails themselves.

Third, as part of this investigation but independent of the attack on Google, we have discovered that the accounts of dozens of U.S.-, China- and Europe-based Gmail users who are advocates of human rights in China appear to have been routinely accessed by third parties. These accounts have not been accessed through any security breach at Google, but most likely via phishing scams or malware placed on the users' computers.

We have already used information gained from this attack to make infrastructure and architectural improvements that enhance security for Google and for our users. In terms of individual users, we would advise people to deploy reputable anti-virus and anti-spyware programs on their computers, to install patches for their operating systems and to update their web browsers. Always be cautious when clicking on links appearing in instant messages and emails, or when asked to share personal information like passwords online. You can read more here about our cyber-security recommendations. People wanting to learn more about these kinds of attacks can read this U.S. government report (PDF), Nart Villeneuve's blog and this presentation on the GhostNet spying incident.

We have taken the unusual step of sharing information about these attacks with a broad audience not just because of the security and human rights implications of what we have unearthed, but also because this information goes to the heart of a much bigger global debate about freedom of speech. In the last two decades, China's economic reform programs and its citizens' entrepreneurial flair have lifted hundreds of millions of Chinese people out of poverty. Indeed, this great nation is at the heart of much economic progress and development in the world today.

We launched Google.cn in January 2006 in the belief that the benefits of increased access to information for people in China and a more open Internet outweighed our discomfort in agreeing to censor some results. At the time we made clear that "we will carefully monitor conditions in China, including new laws and other restrictions on our services. If we determine that we are unable to achieve the objectives outlined we will not hesitate to reconsider our approach to China."

These attacks and the surveillance they have uncovered--combined with the attempts over the past year to further limit free speech on the web--have led us to conclude that we should review the feasibility of our business operations in China. We have decided we are no longer willing to continue censoring our results on Google.cn, and so over the next few weeks we will be discussing with the Chinese government the basis on which we could operate an unfiltered search engine within the law, if at all. We recognize that this may well mean having to shut down Google.cn, and potentially our offices in China.

The decision to review our business operations in China has been incredibly hard, and we know that it will have potentially far-reaching consequences. We want to make clear that this move was driven by our executives in the United States, without the knowledge or involvement of our employees in China who have worked incredibly hard to make Google.cn the success it is today. We are committed to working responsibly to resolve the very difficult issues raised.

As a website that has been attacked by hackers, I feel their pain. I love that Google is fighting for free information in what is otherwise a nation of propaganda. This is just the beginning of what I believe will be the war of the next century. A war of information, technology and privacy. Good thing there is an Army of Techno you can join!

Also, check out some other stupid blogs/tweets from other people.

Favorite quote:
"Universe is 14 billion years old. Seems silly to celebrate one year. Be like having a fucking parade every time i take a piss."

Favorite quote:
"Don't leave the duck there. It's totally irresponsible. Put it on the swing, it'll have much more fun."

Lastly, how much would it suck to lose a competitive Halo match because of hardware failure?

Check out this Kotaku article...

PC
Posted by Productive Citizen at 9:30 AM No comments: