Well, apparently Google is getting hammered with a search. 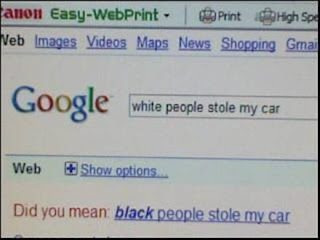 Via NowPublic.com, Google has been spammed with searches for "white people stole my car." The effort has been so big that the phrase has been showing up on Google Trends for a few days.

The term, when search, leads to sites that contain viruses and even more spam. According to Google Insights, the phrase began being "searched" August 19.

The file is most likely doctored, but this is just another weird thing to happen with Google. Remember the Chinese People search?

I still love you, Google.
PC
Posted by Productive Citizen at 8:18 AM No comments:

"Try﻿ doing that with a patch!"

PC
Posted by Productive Citizen at 7:30 AM No comments:

After some intense research, I have found we are very low on random monkey videos here at Random Stupidity.

I hope you liked that.

PC
Posted by Productive Citizen at 7:46 PM No comments:

Away Messages (infinite series of reports)

The VA(government run veterans healthcare) has a 52-page end-of-life planning document called the "Death Book” which just so happened to be reinstated by Obama recently. Page 21 from the “death book” is a questionnaire entitled “what makes your life worth living” Each question has a choice of If you checked 'can't answer now,' what information or people do you need to help you decide?" Obama is lying to you when he says there will be no death panels.

Okay... When did end of life planning become a bad thing? The leap that JM makes from "Can't Answer Now" to "Death Panels" is full of mayonnaise. Maybe those "people" you need to help you decide are your family and friends? Using "information" to make decisions is a bad thing? Sounds very Bushian to me. Whiny Republicans need to get the dick of the health care industry out of their mouths. Seriously, the misinformation being fed to the ignorant and angry town hall/birthers/teabaggers is hilarious. You people are broke, and you are letting billionaires tell you what they want you to think. All they care about is Earnings Per Share. These companies should be ashamed of themselves for abusing the same people that need reform. This is not about race, it is about class. For all the rabble-rousing at the Town Hall Meetings, have you heard a single solution from any of these protesters? Why defend the status quo when you are not receiving any benefit?

"Insanity: doing the same thing over and over again and expecting different results."
- Albert Einstein

Giant Donut in the Sky help us!

PC
Posted by Productive Citizen at 8:32 AM No comments:

Under with Joe Terranova...

PC
Posted by Productive Citizen at 10:17 PM No comments:

Hi, John, my name is Ethan Albright. I play line for the Washington Redskins. You probably already knew that, so I’ll continue. I am writing in regards to the overall player rating of 53 that I have received in Madden NFL Football 2007. I feel that this is fucking bullshit and you should kiss my mother-fucking ass. Ahmed Carroll was rated a 78 and the Packers just cut his ass on a Tuesday morning after his performance in a Monday night game. That is pretty terrible. The worst part is that his overall rating was sniffing 80.

You know what, John? Two can play this game. I rate you a fucking 12. I rate you a fucking 12 in Ethan Albright Football 2000-ever except for in the category of ball-licking. That is where I will spot you a 98 rating. You will receive this score because I will never give your blubbery ass a 99 in any category. Take that, pencil-dick. Go do Al Micheals or something. Boom.

It’s also pretty wonderful that my awareness rating was 59. You make it sound like I wake up in the morning, helplessly shit and piss myself, then lose three of my teeth before I discover that I am trying to eat a rock for breakfast. Fuck, John, I understand you saying that I am slow and lacking athleticism, but a rating like this pretty much labels me as retarded. Rod Hate Me Smart has a 52 in this category. Electronic Arts is saying that seven rating points separate me and the breathing embodiment of the perfect oxymoron. Rod Smart struggled to arrange words in sentence form. Cave men had better hold of the English language. The only actions that separate point values of ignorance at this embarrassing level are things like using your own toothbrush to wipe your ass. I basically edged out Rod by my lack of shit teeth. If I take a night school class, could you bump me up to a 60?

I have received the impression that you feel that I am lacking in the agility category. I should consider a walk through my living room where I don’t crash through a wall or kick over furniture a resounding success. My agility rating on your game is 33. It makes it sound like I just topple over if I start walking too fast. Ted Washington is rated a 40 in agility. He is listed at 365 pounds. If Ted Washington tied a white lady up and made her wear a metal bikini, he’d look just like Jabba the Hut.

John, you are such a fucking dick. I also noticed that my kick return rating was a 0. I was rated a fucking zero? So you feel that I shouldn’t even receive a 10, or even a 5? You are pretty much saying that I couldn’t even fall forward on a ball kicked in my direction. I would just stand there and let the ball bounce off of my fucking face. Fuck that, John, I returned an onside kick 6 yards in 2002. You should have just slapped a – 4 on me and had the EA staff ambush me with paintball guns.

Finally, I would like to comment on an unlikely topic, my pass coverage ratings. I see that I am a better at man-to-man coverage (31) than zone (21). Fuck me sideways with a lunchbox. Where did these scores even come from? How much time is spent coming up with the pass coverage ratings of offensive lineman? Can I have that job? Let’s see here, I think that Orlando Pace would be slightly better at jumping intermediate routes than Larry Allen. While I’m at it, I can assign the passing ratings for offensive lineman as well. I can use mine as a guide.

I was rated with a throwing power of 17 and accuracy of 16. Orlando Pace has a 22 power and 17 accuracy rating. Did someone at EA really put time into figuring out that Orlando Pace edges out Ethan Albright in both throwing power and accuracy? I will challenge him any day. My horrible passer ratings are of greatest misfortune to my son, Red Beard Jr. The poor boy is not only hideously ugly and covered by freakishly large freckles. He also has to suffer through playing catch with me and my senile-elderly-woman-type passer ratings. A session of tossing the pigskin usually consists of me missing my son by thirty yards in sporadic directions. I led him in front of a fire truck once and my wife kicked my ass. This is because of my 76 toughness rating. Yes, a 76 is far better than the other ratings, but I’m a fucking lineman, damn it. NFL Linemen are considered to be synonymous with toughness. According to your game, I am a retarded, uncoordinated, pussy-ass fuckwad that can’t fall on a kickoff, throw, or spell. I am, however, slightly better at manning up on a receiver than dropping into zone coverage. You lose your mind more and more each year, old man.

Fuck you, John. Please expect to find red pubes in various meals you consume for the rest of your life. If you fuck with Ethan Albright, you call down the thunder.

Wow, it must suck to be the worst rated player in Madden.
Thanks to Colleen for sending this story to us...

PC
Posted by Productive Citizen at 11:59 AM No comments:

He really didn't want to go to Church...

I salute you, crazy Utah kid...

PC
Posted by Productive Citizen at 9:58 AM No comments: